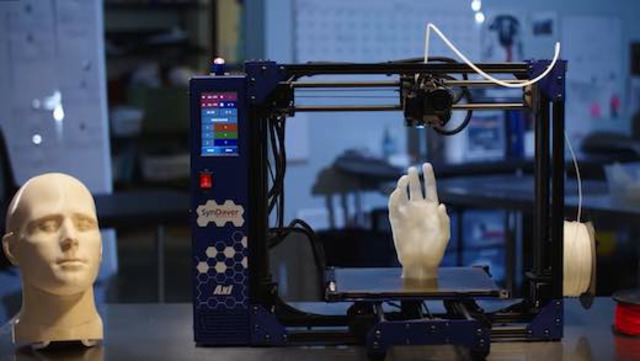 SynDaver, which has used 3D printers extensively in its manufacturing operations for the better part of a decade, created a new division called SynDaver West, leveraging talent from a well-known Loveland, Colorado 3D printing company that closed down at the end of 2019. Since then, the SynDaver West team has been quietly working on the development of SynDaver Axi.

“When we designed this printer, we incorporated the best features from every other leading printer currently available, fine-tuned them to ensure the printer works amazingly well, and made it rugged and remarkably reliable,” said Curt Ketner, vice president of SynDaver. “This printer can be used by companies with a need for serious 3D printing capabilities or by 3D printing hobbyists, and we even took security into consideration, so this can be immediately adopted and deployed by the military while maintaining operational security.”

The SynDaver Axi features a large color touchscreen; a heated, automatic self-leveling and removable bed plate; an E3D Hemera toolhead; as well as unprecedented precision and dimensional accuracy. Plus, unlike most 3D printers, it can print large volume builds to the full size of the print bed with edge-to-edge printing capability. The Axi is shockingly quiet, features a unique 3-year manufacturer’s warranty, free U.S.-based customer and technical support and is American made.

“Axi is highly capable and durable – basically the printer I have always wanted,” said Dr. Christopher Sakezles, founder and CEO of SynDaver. “Still, this is just the beginning for us – we are already developing our next printer which is expected to launch sometime in Q1 next year.”

The Axi retails for $3,250, and anyone interested in purchasing one can do so directly through SynDaver, or through one of the company’s official channel partners, which include IT-Works 3D, Makerwiz, Midwest Technology, 3D Printlife, and Printed Solid. The SynDaver Axi will also be available for purchase on Amazon, Matterhackers, Mouser, Digikey and Print Your Mind soon.

The Axi will be manufactured on SynDaver’s campus in Tampa, which is being set up as a new business incubator. According to Sakezles, the incubator will focus on helping companies that are manufacturing American-made goods in the technology space, and other businesses that serve those companies.

SynDaver’s synthetic humans, animal models and task trainers simulate the anatomy of live patients in great detail, including individual muscles, tendons, veins, arteries, nerves and organ systems. The company’s patented synthetic tissues are made of water, fibers and salts, and each has been validated against the relevant living tissue for mechanical and physical properties.

This site is an ideal choice to sort out your media related queries, source and plan your daily media requirements.